Download Championship Manager 2 (CM2) safely and for free right here. The game is a soccer management simulation, where you start in the season 1997/1998.

In CM2 you're the coach in of the biggest clubs in Europe. Despite the fact that the game consists purely of statistics and tables and no graphics at all, it's extremely addictive, and you cannot avoid not getting hooked if you're a soccer fanatic.
You can play in the following leagues: English, Italian, Spanish, French, German, Scottish, Dutch, Portuguese, and Belgian.
If you're looking for a easy way to become natinal trainer in the game you can become it by typing in the following players for the individual countries:
Denmark - Bo Johansson
Norway - Egil Olsen
Scotland - Craig Brown
Italy - Cesare Maldini
France - Aimé Jacquet
Spain - Javier Clemente
Nederland - Guus Hiddink
Belgium - Georges Leekens
Germany - Berti Vogts
England - Glenn Hoddle
North-Ireland - Bryan Hamilton
Ireland - Mick Mccarthy
Wales - Bobby Gould 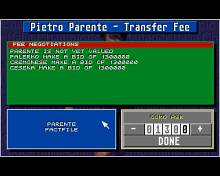 In order to play the game you need to install DOSBox. We also recommend that you run DOSBox via DosBox Frontend Reloaded.

Check out Championship Manager 2: on video:

Critic's assessment as well as advantages and disadvantages